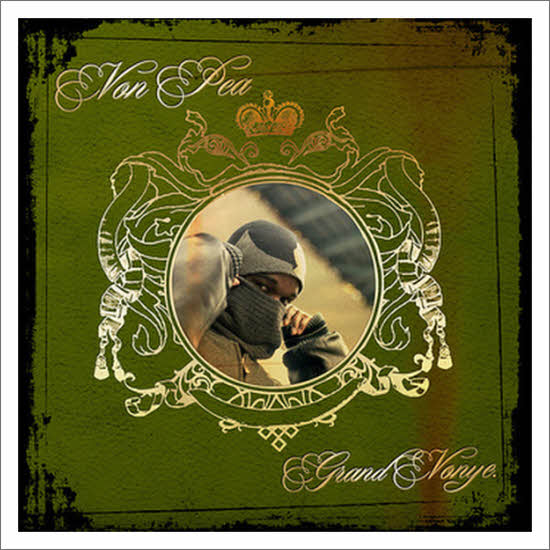 Brooklyn Native Von Pea unleashes some unreleased material from the Pea vault.Peace to the Beatmaker!

“Grand(er) Vonye! remixed in 24 hours 4 years ago. I love the samples I found for Progress Report and Critical Beatdown (keep in mind this is a remixed project so these beats didnt exist when the songs were written) and I got tired of not sharing this with anyone so…here it is! (You can say $0 by the way)”

“I’d recorded the original “Grand Vonye” over a bunch of Kanye beats but then decided to do it with my own. I started on April 20th, 2007 around 7pm and finished on April 21st, 2007 around 7pm. I did this for fun back then and never released it because it was done so quick, but since it still sounds good to me here it is.”

Produced by Von Pea for TSOPea

I actually like this better then the Kanye version he dropped 🙂 My only problem was I wanted more when it ended.

Born and raised in Brooklyn New York, Von Pea has Emceeing since 1991 and producing since 2000, initially attracted to hip hop among others, Another Bad Creation, and so many other young rappers that were near his own age, Von would eventually transfer its interest in those who would become his strongest influences – A Tribe Called Quest De La Soul Big Daddy Kane DJ Jazzy Jeff & The Fresh Prince and Biggie in 2002, Von Pea began an alliance with the original members of the North Carolina rap group Little Brother (Phonte Rapper Big Pooh and 9th Wonder), which leads him to be with on such projects as Phonte and Nicolay’s Foreign Exchange “Connected” album ( “Von sees ‘) Little Brother’s” The Minstrel Show “(” Cheatin’ Interlude) and “And Justus for All” ( ‘words fromour sponsor “) in addition to his group’s music, Von has released acclaimed projects as 2003’s” Custom Fitted “2007’s” Grand Vonye “and his late 2007 Remix Project” American Angst “which was seen as one of the best of Jay Z remix album, Von Pea is also a member of rap group Tanya Morgan.Read More Here…

Make sure you check out the homie Von @ vonpea.com